So, to start the proverbial ball rolling, I give you this jubilant little chap (the embodiment of reinvigoration-with-creative-zeal, effected by aforementioned field trip): 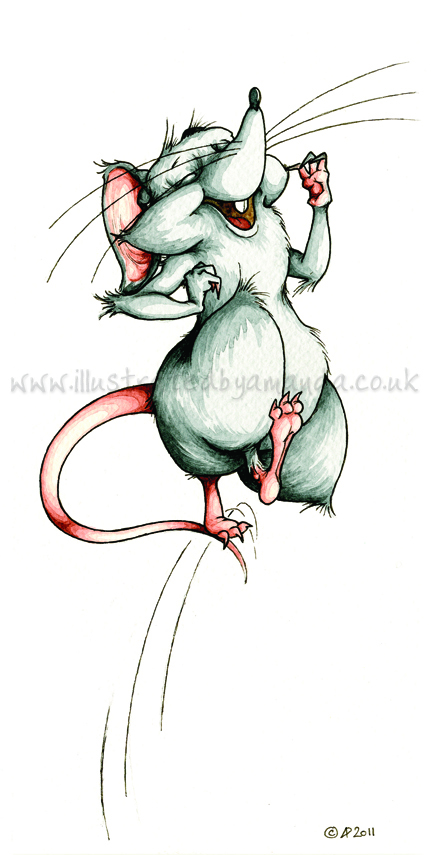 Yes, yesterday’s attempt to scramble out of the pessimistic torpor into which I had pitched headlong on Wednesday – by determining to splash out on a Travelcard (FYI, now an eye-watering £15.00 if one wishes to land within walkable distance of one’s Staines/Laleham residence) and hunt for, if not inspiration then at least, distraction in the bustle and chaos of The City – was a more than moderately successful one. In honesty, though, the gallery district of Green Park is perhaps the least bustling and chaotic of London’s many esoteric enclaves (esp. of a mid-January morning) flanked, as it is on all sides, by gentlemen’s grooming establishments, bespoke tailors, and purveyors of every conceivable cufflink in creation. And cheese. The Illustration Cupboard (22 Bury Street, SW1Y 6AL; referred to, hereafter, as the IC) is nestled in (as you might imagine) a cupboard-sized nook betwixt several such shops, a mere Martini-glass’s throw from the polished-brass threshold of Fortnum’s, The Wolseley, and The Ritz. Happily, The Royal Academy of Arts is also close by, on Piccadilly, and the Chris Beetles Gallery – another, but vastly more extensive gallery, boasting (according to its website) the ‘greatest stock of Illustrators and Cartoonists in the world’, www.chrisbeetles.com – is located on Ryder Street, running perpendicular to Bury Street, and so affording some much needed (frequently comic) relief from the plethora of supercilious art dealerships and cummerbund specialists abounding in this postcode. ***As a side note, there is currently a display of Ronald Searle works at the Chris Beetles Gallery – although he, along with Quentin Blake, W. Heath Robinson, E. H. Shepherd, et al, seem to be permanent fixtures (to varying degrees) in the collection – a meagre slice of which I managed to glimpse through the window en route to the IC. Still very much an active illustrator, and with his 90th birthday precipitating a raft of showcase features in arts and culture reviews across the media spectrum last year, Searle continues to enjoy celebration and to inspire widespread interest and amusement – which, this February, is to be harnessed in support of Macmillan Cancer Care and the Foundling Museum: the charitable evening billed is to include a display of the 47 paintings Searle created for his wife, Monica, to cheer her through a gruelling five years of chemotherapy. That, as I think you’ll agree, is love.***

So, onto Bury Street where I met my illustrator friend, Elena Blanco (www.dreamyme.com – our trajectories first intersected in 2007 at the City Lit Children’s Book Illustration evening class [tutor: Dee Schulman – www.mytotallysecretdiary.com/dee.html] that catalysed this whole illustrating caper), and we dove into the IC to spend almost an hour (only remarkable because it is such a teeny gallery) poring over the incredible works on display. There were all the usual suspects, greats of modern illustration – whom doubtless appear in bold and several font cases larger than other exhibitors in the publicity material – in order to tempt (populist? Probably not very fair…) visitors over the threshold: Lauren Child (of Charlie & Lola fame/ubiquity); Babette Cole (prolific and brilliantly irreverent writer and illustrator, responsible for such gems as Mummy Laid an Egg and Hair in Funny Places); Anthony Browne (Children’s Laureate [and v. interesting panelist on the subject of the future of children’s book illustration at one of the London Book Fair seminars I attended last April]: ’nuff said); Maurice Sendak (Where the Wild Things Are, fabulously popular and successful artist – often confused with the equally brilliant Axel Scheffler [The Gruffalo]); David McKee (responsible for the multicoloured-patchwork Elmer, and that stalwart of 70’s-90’s children’s programming, Mr Benn); Shirley Hughes (her books and illustrations featured prominently in my childhood library, and she remains one of my very favourite artists – most famous for Dogger and Alfie, but whom I loved best for her illustration of Dorothy Edwards’ My Naughty Little Sister stories: struck a cord, somehow…); Tony Ross (Horrid Henry and Little Princess books); Jill Murphy (Peace at Last – bears of distinction; astounding coloured pencil work); Chris Riddell (wonderfully spindly inkpen renderings of a dark and mysterious nature, recently popularised by his illustration of several Neil Gaiman books); and, a more recent addition to the ‘canon’, Oliver Jeffers (How to Catch a Star, The Way Back Home, and The Great Paper Caper – the book jacket of which doubles as a superlative paper aeroplane template – and the illustrator selected to publicise World Book Day [The Book Trust] 2007).

Of these, I found Jill Murphy’s work the most surprising ‘in the flesh’ (despite the beguiling glitter embellishments to Babette Cole’s work which, of course, don’t feature in her printed books): the quality and intensity of the colour and grading she is able to achieve with coloured pencils is remarkable – unless your eyeball is trained mere centimetres from the paper surface, and you’ve also clocked the helpful artist/title/medium/dimensions label, you would almost certainly proclaim it the work of a spectacularly well-controlled airbrush. Presumably these are pretty decent pencils, (Caran D’Ache? Certainly none of your WH Smith wannabes), but still… In addition, however, were sample works from many other celebrated and staggeringly accomplished illustrators with whom I wasn’t quite so familiar, but whose varied techniques and compositional approaches I found, perhaps, more arresting for their novelty to my sphere of experience. The work of Benedict Blathwayt (most notable publications being those concerning the exploits of The Little Red Train) I found astonishingly detailed – whole spreads teeming with fantastically detailed characters and activity, the sort of intricate illustration that could trap the casual observer into a lengthy mission of exploration and discovery as each square millimetre of the image is circumnavigated and enjoyed. Other favourites were Satoshi Kitamura, Alexis Deacon, Eva Montinari and Catherine Rayner (see IC website for information – biographical details, publishing and prizewinning histories – on these illustrators), but the artist I think I felt greatest affinity with and admiration for was Christopher Wormell: entirely self-taught, he has achieved incredible success in his chosen profession, with recognition in the form of the coveted Ragazzi Prize at the Bologna Children’s Book Fair (1990), shortlisting for the Kate Greenaway Award, and having worked with, among others, that behemoth of children’s book authorship, Roald Dahl. On display on the (v. low-ceilinged!) first floor of the IC, is a great image from Two Frogs (of two frogs, one of which is brandishing a baseball bat rather menacingly…). As I understand it, he is best known for his lino cut and wood engraving illustrations (see http://www.chriswormell.com/homewhite.html,  http://www.theartworksinc.com/biography/wormellc.html) but these frogs – rendered in pastels – were utterly captivating, and his watercolour work is, similarly, enchanting. V. modest, too. Rather nauseating, probably, if it weren’t that all faculties were already engaged in the business of being, simultaneously, awestruck and humbled and, thus, incapable of diverting a single iota of energy to the practice of being sickened…

I cam away from the gallery resolved to pursue two new avenues of illustrative endeavour: 1.) To – with the application of some serious determination and self-discipline – practise the rendering of backgrounds and environments for my characters to populate, and 2.) to try combining media which, ordinarily, I’d consider entirely incompatible, e.g. pastel and watercolour. I have never been able to reconcile the idea of a conjunction between two such opposite qualities of material – it’s either liquid and wet (paint/ink), or it’s dry (pencil/pastel); all I can imagine is some unholy paste on the page with which I am able to do nothing controlled or adroit – merely gaze at in barely concealed disgust and/or bafflement. The effects achieved by artists such as Eva Montinari, however, suggest that this is not necessarily the only possible outcome…

Depending upon the success of (either of) these two strands of experimentation, I may include some initial such attempts in next week’s post. ‘Til then, however, adieu – and have a fantastic weekend!