Paint-washes and poultry (and procrastination)… 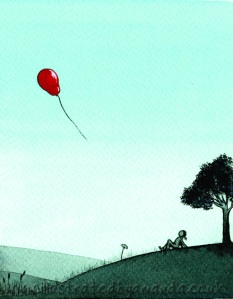 Alas, as is so frequently the case, my rather glib suggestion that I might spend a handful of otherwise-unoccupied hours performing arabesques of innovative creativity – inspired by the cave of coruscating wonders (i.e. the Illustration Cupboard) explored during last week’s ‘field trip’ –  came to nought. Ordinarily, I would blame life’s capricious demands, coupled with a propensity to concerted faffing and diverse methods of procrastination, but this week I have been what might pass for ’employed’ – a repeat commission to design and illustrate four concepts for a book distributor’s seasonal catalogues – necessitating a certain degree of consistency with material I have provided for similar publications previously. However, as I was shuffling through the detritus littering my (shrinking, I’m horribly certain) cerebral cavity for suitable catalogue cover compositions (apologies for the incidental alliteration…), I thought I’d practise a watercolour wash. It’s some time since I’ve drawn anything other than stand-alone characters, and a lapse in performing a particular technique – of almost any duration, I’ve found – establishes fertile ground for doubt and hesitancy to creep in: the old adage about keeping one’s proverbial hand ‘in’, rubber-stamped as an irrefutable truth in my experience. Once I’d laid a few undulating, shadowy hills over the wintry sky, it seemed natural to include a reclining (if somewhat uncomfortably – I think perhaps she’s in the initial stages of leaping, startled, to her feet) figure, and a bright, runaway balloon. In retrospect, I think an inflatable in a slightly more orange hue might’ve worked better – and a more considered configuration of limbs to render the silhouetted figure a little more natural-looking – but, as an idle painting exercise, quite satisfying. It did, however, draw my attention to the glaring gaps in my paintbrush arsenal: principally, a broader (i.e. more than one) range of stipplers, a fan gogh, a half-rigger, a sword (of the bristled as opposed to burnished-steel, swashbuckling variety) and a good foliage brush. Unfortunately, yesterday’s jaunt into the City to spend a delicious half-hour or so gawping at my materials-wish-list, arrayed in all its splendour over two floors of London Graphics Centre (http://www.londongraphics.co.uk) retail space, was cruelly truncated by aforementioned LGC’s decision to execute a full refurb of the first floor (realm specialising in painting paraphernalia). Sigh. Although I’m sure my traitorous debit card was secretly exulting from the safety of my purse at a potential spending spree thwarted… FYI, said refurbishment was scheduled for completion tomorrow (Saturday 29 Jan), but a rather sceptical LGC staffer reckoned Monday (31st) was distinctly more likely.

In between various attempts to wrestle a convincingly proportioned, perspective-obeying spiral staircase from my pencil and onto the draft papers for this week’s commission (we are old foes, the spiral staircase and I…), I began some preparatory sketches for an as yet nascent children’s book featuring a rather melancholy chicken. I find even an elementary understanding of the anatomy of whatever creature it is I have chosen to conjure into pencilled being makes for a far more convincing rendering (and usually circumvents incidences of curious skeletal mutations that have the potential to emerge otherwise…). Even better, would be to have a live subject on hand (or, failing that, access to video footage of the same) to demonstrate exactly the way they move and the ‘mannerisms’ specific to that species; an awareness of ,e.g., the strutting, head-bobbing gait, for me, imbues the drawing process with a sense of the emerging character – I don’t think it’s any coincidence that many fictional chicken (and chicken-like) characters are represented as neurotic, anxious, fidgety, agitated (etc.), given that the manner in which they move we might reasonably identify with similar behaviours in our own species and, thus, project the conditions (neurotic, agitated, nervous, inclined to histrionics – I’m thinking Nick Park’s Chicken Run as I type…) of which these behaviours are commonly symptomatic upon the chicken. An anthropomorphism, of sorts, even if the chicken outwardly retains its uniquely chickeny appearance (i.e. none of the raised ‘eyebrows’ /wing feathers coiling into what looks remarkably like a fist, etc., that might readily spring to mind at the mention of such a term). Anyway, there is still some considerable way to go, yet, before I arrive at a chicken – or rather, as I think I’ve settled upon, cockerel – that is sufficiently malleable as an illustrated character, but just thought I’d share a couple of the initial roughs (mainly as ballast to the meagre coloured offering above…): 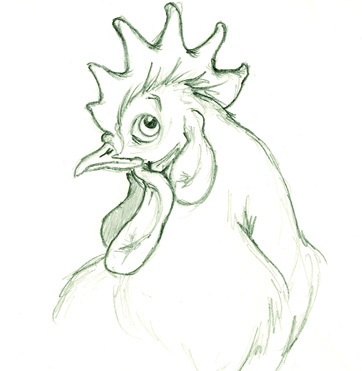 These two represent an amalgam of about four different breeds of chicken, drawn from a chicken-keeping handbook borrowed from my local library (also gave me an opportunity to satisfy a more than passing interest in the business of chicken-keeping – I have decided that our garden is just too large to thrive as an ornamental concern under my sporadic ministrations…). It most closely resembles the Australorp, but owes its comb to the Leghorn, and a certain tendency to plumpness to the ‘cuddly’ Orpington. There are some fantastic breed names listed in the publication I found (I give you the Frizzle, Rumpless Game, Scots Dumpy, and the Sicilian Buttercup, to name but a few), but one of the most striking must be the Sebright, which looks as if its every feather has been painstakingly edged with fineliner – particularly the white ones (Silver Sebright), which just seem to invite colouring in… http://en.wikipedia.org/wiki/Sebright_(chicken)

Another tangent I careened off on this week (yesterday, in fact, en route to my unusually disappointing date with LCG) entailed a visit to the very curious Sir John Soane’s Museum, at 13 Lincoln’s Inn Fields (http://www.soane.org). Conceived as a wonderfully eclectic and inspiring resource for his architecture students, the museum is a somewhat baffling, but also frequently beautiful and definitely intriguing, testament to Soane’s curiosity for and interest in design from around the world and and across classical civilisations – Greek, Roman, Egyptian and Oriental styles are all variously represented, but in astonishingly close proximity (the collection seems to impinge on the visitor from all sides with the net result of being, sometimes, uncomfortably oppressive) and a ‘candlelit’ (a handful of flickering, low-wattage bulbs are arranged about the lower floor to give the impression of guttering candles – authentic to the original, and intended, lighting scheme…) gloom. It’s certainly worth a visit, most particularly to marvel at the assortment of stained glass skylights outcropped from the many small extensions, at various levels of the building, like so many cut-jewels. And it’s completely free.

I seem to have rambled on rather longer than I had intended today (waiting in for a delivery of tongue-and-groove board and fibreglass-insulation-resistant outfits with which to conquer the loft tomorrow – and not progressing with catalogue cover roughs…), so shall appropriately take my leave, shortly after reminding any and all whom might be harbouring a hitherto undisclosed interest, that the niche greetings card competition is still open (until Sunday night, 30th Jan): any more thoughts as to slightly less than conventional greetings I might add to my burgeoning range will be gratefully received – and rewarded, if not with fortune, with fame and a modest stock sample (once printed)! (See previous posts for more details.)

Meanwhile, I hope you have a simply glorious weekend!