Spectacularly overdue, yes, but still technically valid I think you’ll find… Gah  – curses! The miraculous resurrection of prompt-and-timely-Amanda-shaped-blogger (hush your snickering…) at the dawning of 2012, alas, had to be postponed (and yes, I do appreciate the irony) to accommodate the brief-but-frenzied appearance of self-assessment-tax-return-filing-Amanda – a character given to flouncing into my studio, shuffling bits of paper, imbibing copious mugs of coffee and circling things in red biro, and then breezing out again a day or two later wearing an expression 30% bafflement and 70% blessed relief. I usually try and encourage her to perform this cameo role pre-Christmas, but she rarely deigns to oblige, preferring to save the tedious-yet-stressful form-filling until January’s flat, grey aftermath.

However, it is now emphatically The New Year, and I am positively fizzing with excitement about the next 12 months! 😀 The two (and [quite] a [substantial] bit)-week hiatus over Christmas was veritably stuffed – in the manner of a (topical) turkey – with seasonal shindigs, evenings with old friends and days with relatives (ancient – pardon the hyperbole, grandad – and brand new), chilly morning runs and thrilling news from friends in far-flung climes. The unscheduled 10-week-early arrival of my sister-in-law’s twin boys on 6 December swelled the ranks of our baby-sized nieces and nephews to four, and doubled my ‘Baby Christmas presents’ project overnight – but it provided the precocious Ted (with whom followers of my mainly pencil-drawn, occasionally a bit crumby Advent App 2011 will be [exhaustedly] familiar) the opportunity for two further outings: 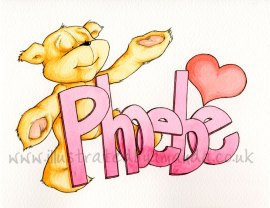 After plundering the local Hobbycraft for some picture frames (having trailed Marvellous Dave and poor father-in-law around sundry purveyors of picture frames, mirrors and the like and found them all sadly wanting in the decent solid-wood frames department – especially in duplicates of 4…), these were despatched, enveloped in Christmassy tissue, to the parents of the above-featured infants for hanging at their leisure. There should, really, have been a fifth for my exuberant niece, Annie, although – at 10 (and a half – it’s critical, y’know…) – I think she’s rather outgrown cute teddies/a name badge for her bedroom door and seemed satisfied (i.e. falling over herself with excitement, in a deeply gratifying child-at-Christmas manner) with a TV for her room instead…

I’m considering adding the ‘plaques’ to my Etsy-stored repertoire as a ‘custom’ product, but wonder whether I should perhaps offer them as ready-framed – Theo’s plaque had a slightly larger frame, allowing me to mount the watercolour on a powder-blue paper which I felt really complemented the pine frame and colourings of the piece quite pleasingly.

In other news, (Travel Edition) Steve and his gorgeous girlfriend, Eliza, pinged a message through the ether from South America – mid-journey-of-a-lifetime – to share the news that they’re now engaged (hurray!). This will, clearly, call for  some concerted celebration on their return in March, but has also spurred me on afresh to the subject of greetings cards and revisiting my current collection in order to refresh and replenish designs ready for sending out to prospective agents and printing houses over the next few weeks. Watch this proverbial space…

I’m also marshalling my wits (and resources) for this year’s visit to the epic Bologna Children’s Book Fair, which – now the Fraught Fortnight of November 2011 (when the [UK & Italian, combined] mercurial international postal services thwarted my every attempt to discover whether my submission to the Illustrators Exhibition had been received) is but a distant memory – I can embrace with the excitement and anticipation it should be rightly accorded. I shan’t make the mistake of preparing an original piece as business-card dispenser this year, and am tinkering with a few different options re. promotional materials for posting on the ‘wailing wall’ (although definitely draw the line at the ridiculous industrial-sized polythene banner some wit had procured to advertise themselves last year – prohibitively expensive, aside from the rather selfish space-hogging issue…). Flights are now booked, as is accommodation – I shall be ‘rooming’ with the delightful clutch of fantastically talented Italian illustratori I had the very great pleasure of meeting last year – and I have, in a fit of linguistic acquisitiveness, subscribed to the BBC’s free Italian language beginners’ (online) course http://www.bbc.co.uk/languages/italian/ in the hope that I might better be able to convey the fact that I am entirely lost/yes, am still unpublished/need ice-cream as a matter of urgency, etc.

In the meantime, however, I shall mainly be eating Refreshers, to reflect my fizzing-with-excitement mood, and working on some mischievous characters to accompany me between the pages of my portfolio in a couple of months’ time 😀

’til next time… AP x