Jumping into the unsprung Spring…

After the welcome, sun-bathed and spring-like – but, alas, all too brief – reprieve of Monday, Britain (or, at least, this particular southern-ish corner of it) is plunged once again into a soggy slough of despond: uniformly grey and drizzly, and arguably the most remarkably convincing imitation of late October/early November yet seen by the traditionally more cheerful-and-bright (with the occasional sudden-downpour) April/May duo…

Awash with great rippling pools of surface water as the landscape has been, I had thought to harness the ages-old topic of Grumbling About The Weather to more creatively productive ends, i.e. the representation of last Friday’s Illustration Friday topic, jump , which had immediately conjured to mind the image of a wilful child in mid-dynamic-puddle-splash. Admittedly, this impulse was one-part pursuit of satisfactory solution for the given brief and nine-parts seizing an opportunity to virtually (i.e. by means of a pencil-drawn representation of myself) jump in a large (probably muddy – they always were, as I recall…) puddle kitted out in jauntily patterned rain-wear & wellies without incurring the social approbation actually doing this would undoubtedly invite. However, my initial sketches really didn’t capture the unbridled glee of performing this act of elegantly simple childhood anarchy, so I’m afraid I (rather childishly…) abandoned this line of endeavour and came up with this sketch: 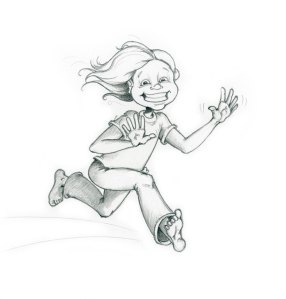 Unfortunately, this, to my mind, is definitely more of a ‘leap’ than a ‘jump’ – I’m not sure whether that’s because it has a discernible, directional quality, and I’d associate leaping with a concerted effort to upgrade a mere jumping action to a travelling movement, with a destination point identifiably removed from the departure point – so this I also rejected. It did, however, rather neatly provide me with the basis for a drawing exercise to insert into a character-based illustration workshop I am preparing to deliver to some Key Stage 2 (7 & 8 year-olds) primary school children next week:

However, this still left me sans contribution for this week’s IF challenge. Happily, I was already working on a birthday card for our neighbour’s soon-to-be-16-year-old daughter and, recalling the (largely unfounded, it transpired) excitement the approach of this ‘milestone’ year had brought for me, came up with the following as demonstration of the unfettered delight I had experienced at the thought of the many great freedoms, personal/emotional/universal insights and wisdoms certain to be visited upon me/with which I’d become magically imbued as the Big Day dawned (or something of that general ilk…):

7 Responses to Jumping into the unsprung Spring…