The inverted duckling: a solution…

Further to the duckling sketches awkwardly tacked onto the end of my last post, last week I posted a new design on Twitter (one of a couple I’ve been working on for a recent commission) which, if you missed it, looked a bit like this: 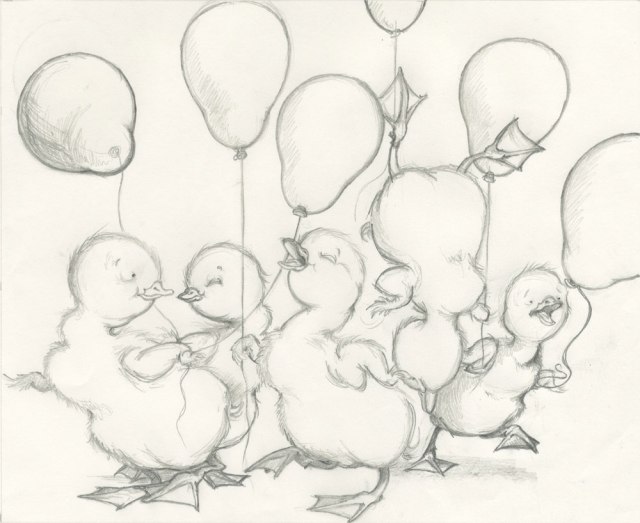 Having, pre-emptively (of anyone more observant to the challenges of a duckling’s equilibrium when acted upon by forces exerted by a couple of helium balloons doing so) expressed some concern that perhaps the little chap suspended upside down by his little webbed foot may struggle to regain a more comfortable, vertical (i.e. correct orientation) position on the ground, the wonderful Lynn Adams suggested that his friends may be persuaded to offer some assistance…

This week’s Illustration Friday topic, rescue, practically demanded that I explore this outcome, if only to lay concerned minds at rest that aforementioned small waterfowl was not doomed to spend eternity (or at least the lifetime of a helium balloon – however long that might…?) futilely ‘windmilling’ his stubby little wings in an attempt to plant those leathery feet on the ground again (and no doubt suffering a beast of a headache in the process…): 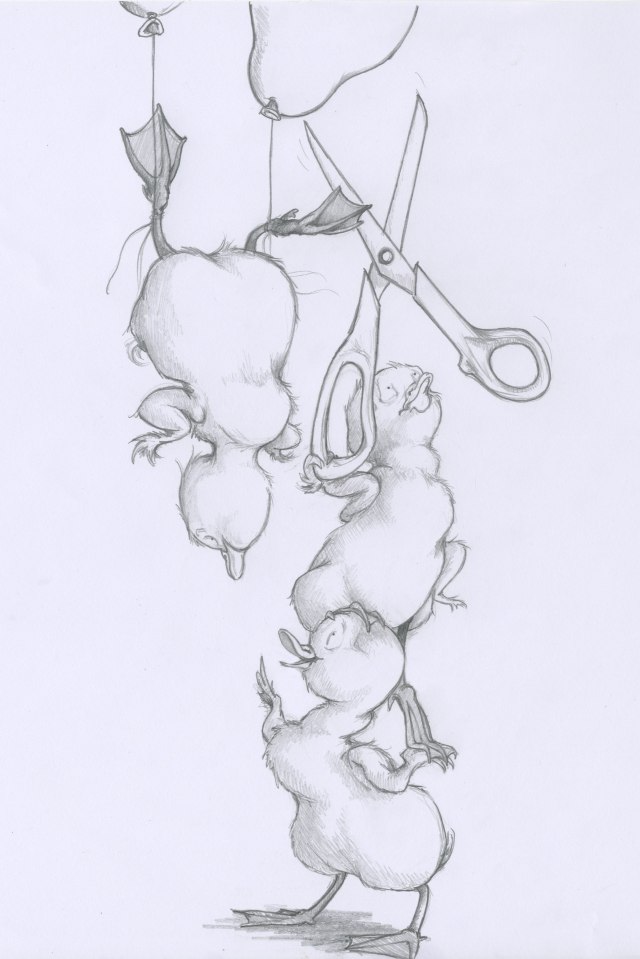 This, those sticklers for continuity among you will note, is not the same duckling, being suspended as he is by both of his little webbed feet – an even more fiendishly tricky predicament from which to extricate himself than previously posited. However, I thought it was funnier (despite the heightened risk of incurring condemnation from defenders of illustrated animals’ rights…), and has contributed extra height to proceedings, necessitating some further farcical duckling acrobatics – including the wielding of a dangerously sharp and cumbersome pair of scissors (I fearlessly court health & safety-related outrage, too!!). It is, I think it’s fair to say, a rescue attempt fraught with risk of serious injury, possibly death, and certainly the wanton destruction of inflatable party merchandise. However, my hope is that they will all miraculously emerge utterly unscathed from the enterprise – except, perhaps, the know-it-all on the ground whom is here offering his unbidden opinion on the wisdom of attaching balloons to one’s feet… (I think the afflicted party has already arrived at a pretty solid understanding of the flaws in his original plan entirely unaided…)

I had really hoped to be able to colour this one up in time for submission, but I have a deadline looming and – while I do love a good procrastination activity – now is the time to  knuckle down!

Have a lovely day – only one more day until the weekend! Hurray! 🙂

4 Responses to The inverted duckling: a solution…